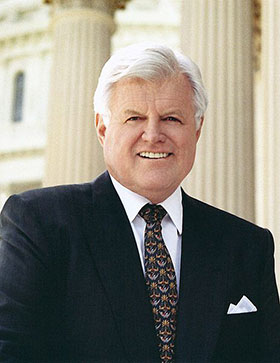 Kennedy was born in 1932, and is the brother of President John F. Kennedy. He served as Senator representing the state of Massachusetts from 1962 until his death in 2009. In 1980, Kennedy challenged incumbent President Jimmy Carter for the Democratic nomination. Carter was facing growing opposition from within the Democratic Party due to the weak economy and the Iran hostage crisis, opening the window for Kennedy to mount a challenge for the nomination. After a number of hard fought primaries, Carter won enough delegates to clinch the nomination, but Kennedy refused to concede, and took his battle to the Democratic National Convention in New York City. At the convention, Kennedy and his advisors attempted to change the rules which forced delegates to vote for the winner of that state’s primary. The move failed, and Kennedy conceded defeat shortly after.

The most memorable moments of the 1980 DNC came in a speech given by Kennedy where he affirmed his commitment to the Democratic platform, and the middle class. Kennedy pledged an emphasis on job creation and lowering the unemployment rate, painting the Republican Party as out of touch with a majority of Americans. Kennedy also spoke out against the Republican tax plan, which he argued would only benefit the highest earners while excluding most Americans. Many of the Democratic Party ideals; equal rights, protecting the environment, and a focus on the middle class, were emphasized in the address, and continue to serve as lynchpins of the Party’s platform. Kennedy’s Democratic Convention speech was the most famous of his career, and laid the foundation for the modern Democratic Party platform, which continues to promote many of the ideals Kennedy argued for in 1980.