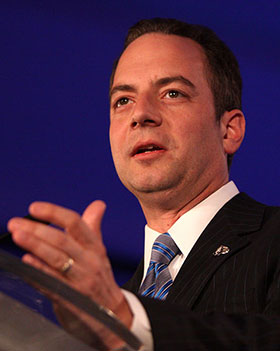 As RNC Chair in an election year, Priebus’ job is heavily focused on the coming election. The RNC homepage contains numerous references to President Obama’s policies, along with quotes from Priebus detailing why he believes Gov. Mitt Romney should be elected in November. In other sections, the party platform is outlined, and revolved around strong national defense, lowering the corporate tax rate, and an opposition to “government health care” initiatives including the ACA. Since becoming RNC Chair, Priebus has focused on building a strong fund raising network for Republicans, and coordinating the 2012 Republican National Convention, which is being held in Tampa, Florida.