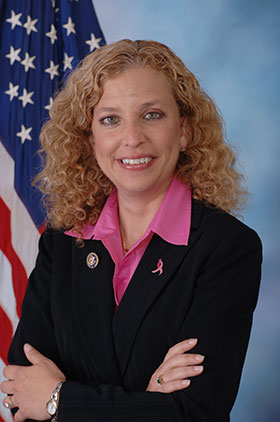 Schultz was born in 1966, and currently serves at the Chair of the Democratic National Committee (DNC), and also as a member of the U.S. House of Representatives, representing Florida’s 20th district. She sits on both the House Committee on the Budget, and the Committee on the Judiciary. Prior to her election to Congress, she was a member of the Florida state Senate and the Florida House of Representatives.

In her role as DNC Chair, Schultz acts as a spokesperson, promoting the party platform by speaking on cable news programs, and appearing on Sunday morning political talk shows. The Chair also plays a significant role in shaping the party platform, working directly with the President and other party elites to craft a message. The DNC website devotes a large section to the party platform, including the official stance on issues relating to same sex marriage, health care, the economy, and more. Schultz oversaw the 2012 Democratic National Convention in Charlotte, North Carolina and will oversee the 2016 Democratic National Convention in Philadelphia, Pennsylvania.