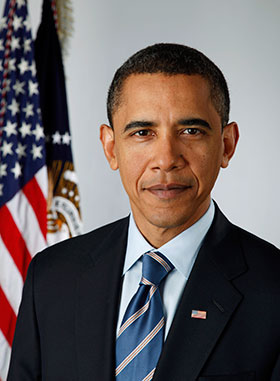 Barack Obama, born in 1961, is the 44th and current President of the United States. He previously served in the United States Senate, representing the state of Illinois from 2005 until 2008. He rose to prominence following his keynote address at the 2004 Democratic National Convention in Boston. Upon securing the Democratic Party’s nomination for President in 2008, Obama revolutionized the use of technology in campaigns by announcing his Vice Presidential pick to supporters via text message. He has also made the use of social media such as Facebook and Twitter a central piece of his campaign, raising money, recruiting volunteers, and communicating directly with supporters through new computer technology.  In 2008, President Obama became the first African-American President in U.S. history when he defeated U.S. Senator John McCain from Arizona.  In 2012, voters re-elected President Obama, picking him over former Massachusetts Governor Mitt Romney.

As President, the party platform is largely a reflection of Obama’s core beliefs, which naturally align with those of the party. For instance, after coming out in favor of same sex marriage, the Democratic Party inserted marriage equality into their platform. This response illustrates how much influence the President has over his party’s platform. Obama has also emphasized job creation, national security, and energy independence, all of which are central themes of the Democratic Party platform. In his second term, Obama continued to enact policies that represent the core Democratic values espoused in the platform (marriage equality and LGBT rights, protecting the environment, economic growth, and women’s rights).