From incredibly powerful political figures to overly influential labor unions, American politics became increasingly corrupt in the late 1800s.  By the turn of the century, there was a clear need for reform.  President Theodore Roosevelt’s speeches about the corruption of corporate donations encouraged Congress to act.  His efforts proved successful when Congress passed the Tillman Act of 1907.  Sponsored by Senator Benjamin Tillman of South Carolina, the bill represented the first piece of legislation enacted that banned corporate contributions to anyone running for a national political office.  Despite the Tillman Act, President William Howard Taft’s Federal Corrupt Practices Act of 1910, Senator Robert Taft and Representative Fred Hartley’s Taft-Hartley Act of 1947, as well as the numerous amendments and federal court decisions surrounding these pieces of legislation, there was no way to enforce these finance regulations until the 1970s. 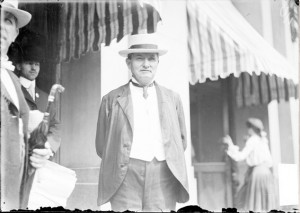 The next effort to regulate unrestricted campaign finance practices resulted in the Federal Election Campaign Act (FECA), which Congress passed in 1971 and updated in 1974 and 1976.  FECA created the first instance of public funding of federal elections: income taxes could fund presidential campaigns and national nominating conventions.  Congress amended FECA in 1974 as a direct result of the Nixon administration’s Watergate scandal. The later amendments limited campaign contributions made by individuals, political action committees (PACs), and political parties and also created a regulatory agency called the Federal Election Commission (FEC).  The FEC finally provided enforcement mechanisms and has overseen all presidential elections since 1976.  Soon after the passing of the bill, the Supreme Court case Buckley v. Valeo (1976) found that laws restricting the use of a candidate’s personal money were unconstitutional.  The Court also ruled that an outside group’s unlimited spending to influence an election was protected under the First Amendment’s free speech clause. This decision, which permitted limits on donations but not on expenditures, established the precedent for much of the controversy in modern campaign finance.